To share your memory on the wall of Alfred Dassinger, sign in using one of the following options:

Provide comfort for the family of Alfred Dassinger with a meaningful gesture of sympathy.

Alfred was born May 12, 1928 the only child of Peter J and Mary (Lefor) Dassinger of Gladstone.  He attended Garden School through the eighth grade and graduated from Gladstone High School.

Alfred was united in marriage to Veronica Martin on June 5th, 1950 at St. Thomas Catholic Church in Gladstone.  Together they farmed, milked cows, ranched and raised their family on the farm where Alfred grew up.

Alfred served his church as a lector and board member of St. Thomas Church of Gladstone.  He was an active member of K of C Council 5490 of Gladstone where he held nearly every office, and settled in as longtime treasurer.  He was a familiar figure as bartender, ticket seller or wherever help was needed.  Alfred and Veronica were recognized as outstanding Catholic Family of the year at the District level in 1977.

He enjoyed farming, especially working with his family, playing baseball, and after retirement, golf.

He was preceded in death by his parents Peter and Mary Dassinger, parents-in-law Frank and Veronica Martin, and 25 brothers and sisters-in-law.

To plant a memorial tree in honor of Alfred Dassinger, please visit our Heartfelt Sympathies Store.

Receive notifications about information and event scheduling for Alfred

There are no events scheduled. You can still show your support by sending flowers directly to the family, or planting a memorial tree in memory of Alfred Dassinger.
Plant a Tree

We encourage you to share your most beloved memories of Alfred here, so that the family and other loved ones can always see it. You can upload cherished photographs, or share your favorite stories, and can even comment on those shared by others.

Posted Dec 12, 2019 at 12:00am
My sympathy and prayers Pat and all your family. His star will shine brightly from above at this Holy Season.
Comment Share
Share via:
AA

Posted Dec 12, 2019 at 12:00am
As an attendee at garden school and a member of the garden 4-H and baseball team. Alfred was instrumental to me in my formative years and beyond. What a wonderful man!
Comment Share
Share via:
D

Posted Dec 11, 2019 at 12:00am
The earth lost a wonderful, caring, loving, sweet gentle soul but heaven gained him. He was such a distinguished man! Alfred reminded me so much of my dad, Bill and they both left us on the exact same date but 40 years apart.
Comment Share
Share via:
JR

Posted Dec 10, 2019 at 12:00am
Dale & Pat: I am so sorry at the loss of your father & father-in-law. May he rest in peace. It is always so hard to lose a parent or a family member. Larry has been gone now for a little over 2 months and we are still trying to adjust. Our thoughts and prayers are with you. Jolene & Lear Rohde
Comment Share
Share via:
LK

Posted Dec 10, 2019 at 12:00am
Alfred was one of the most decent and nicest guys I have ever meet in my life time my sympathy to the family
Comment Share
Share via: 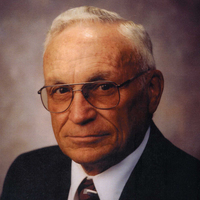