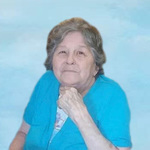 A Liturgy of the word service for Betty Steckler, 82, of Richardton, will be 11:00 a.m., Thursday, May 21, 2020 at Stevenson Funeral Home in Dickinson with Deacon Robert Bohn celebrating. Burial will follow at St. Mary’s Cemetery in Richardton.

Please adhere to the social distancing guidelines established by the CDC and Department of Health.

Betty Schatz was born September 18, 1937 in Stark County, North Dakota, the daughter of Emanuel and Pauline (Heupel) Schatz. She grew up on the family farm and attended country school. She began working as a waitress and during this time met Leonard Steckler. The couple was married on July 23, 1956 and was blessed with six children, Lyle, Sandy, Bernadette, Brian, Becky, and Shayne. The family moved to Hettinger for about 4 years, before settling in Richardton. They operated LandS Café and Locker Plant and Modern Woodcraft until Leonard retired in 2008. They eventually moved to Dickinson in 2010 where they made their home ever since.

Betty was a member of St. Mary’s Catholic Church in Richardton. She loved gardening and sewing. Betty enjoyed spending time with her family, especially camping and fishing with Leonard.