To share your memory on the wall of Llewellyn Kouba, sign in using one of the following options:

Provide comfort for the family of Llewellyn Kouba with a meaningful gesture of sympathy.

Print
A private Mass of Christian Burial was celebrated at Assumption Abbey, followed by burial in the Abbey cemetery.

Brother Llewellyn Kouba, monk of Assumption Abbey, died suddenly in the early morning hours of March 22, 2020. He passed awa... Read More
A private Mass of Christian Burial was celebrated at Assumption Abbey, followed by burial in the Abbey cemetery.

Brother Llewellyn Kouba, monk of Assumption Abbey, died suddenly in the early morning hours of March 22, 2020. He passed away from natural causes unrelated to the COVID-19 virus. He was sixty-nine years old.

Llewellyn was born to Charles H. Kouba and Helen (Jesch) Kouba on August 30, 1950, the second of seven children. He grew up on a farm near Regent, ND. The family milked cows by hand and bought the very first freezer they owned with a cream check. They also raised polled Herefords but eventually sold the livestock and put all their efforts into grain farming. Llewellyn raised exotic pheasants and pea fowl and became a master gardener, especially with flowers, learning the Latin names of hundreds of varieties of plants. Llewellyn created an elaborate rock garden on the farm with a water fountain, water lilies and goldfish.

After graduating from Regent Public High School in 1970, he briefly attended the Minneapolis Institute of Art. He returned home and worked for Blue Star Honey Company in New England, ND, and Korte Interiors in Dickinson, ND, before entering Assumption Abbey in January of 1977. After his candidacy and novitiate he pronounced monastic vows on July 11, 1978. He soon became grounds manager, using a push mower to cut acres of lawn. He also kept immaculate flowerbeds. In winter months he was part of the maintenance crew.

In 1988 Brother Llewellyn was assigned to the Abbey Pottery Studio, and in 1994 he was sent to the College of St. Benedict and St. John’s University to study pottery for a year under Sister Dennis Frandrup, OSB. He returned home to take over the Abbey Pottery Studio creating lovely pieces and keeping meticulous records in his recipe book of glazes, along with drawers of glaze specimens. His trademarks were ceramic leaves on pots, and iris flower motifs that were embossed on the pottery.

All the while, Brother Llewellyn continued painting. Many of his pictures adorn the walls of the Abbey. After taking a workshop in the Black Hills on icon painting, he began a large, altar-sized triptych that took him two years of steady work to complete. The work required egg tempera on specially prepared board and contains a good deal of gold leaf. The triptych is displayed on the east wall of the Abbey cafeteria.

In the 1990s, when rug hookers began coming to the Abbey for workshops, Llewellyn became enthusiastic and set out to create a large, elaborate rug which required the hand-dying of wool, then cutting it and weaving it into Scottish burlap in a design of his own making. He entitled the piece “Blue India” because of the fabulous blue India peacock at the center of the rug.

The Dickinson Press and The Bismarck Tribune did many articles on Brother Llewellyn’s pottery, icon painting and rug weaving over the years. He had a beaming smile and was an easy subject for interview. Llewellyn made friends easily and knew people far and wide.

Health problems plagued him in later years, forcing him to keep smaller flowerbeds until he concentrated his efforts near the Abbey Pottery Studio where he laid a path of ceramic tiles that were designed and fired in the kiln, and kept a large running fountain during the summer months, also fired in the kiln.

To plant a memorial tree in honor of Llewellyn Kouba, please visit our Heartfelt Sympathies Store.

Receive notifications about information and event scheduling for Llewellyn

There are no events scheduled. You can still show your support by sending flowers directly to the family, or planting a memorial tree in memory of Llewellyn Kouba.
Plant a Tree

We encourage you to share your most beloved memories of Llewellyn here, so that the family and other loved ones can always see it. You can upload cherished photographs, or share your favorite stories, and can even comment on those shared by others.

Posted Apr 05, 2020 at 07:01pm
Having recently learned of Brother Llewellyns passing, I am calling to mind the friendship we shared over the last 10 years or so. On my first visit, I bought one of his pots. I shall cherish it even more so now. I longed to make pottery with him someday, and now appears that I'll have to wait, God willing, until I join him in heaven before we will have that chance.
My sympathies are with the community at Assumption Abbey and with his family as also.
Sincerely,
Ray
Comment Share
Share via:

I am so sorry to hear of Br. Llewellyn's death. We have all lost a dear and loving friend and family member.

Llewellyn and I established a life-long friendship after being in the same novitiate class at Assumption Abbey. Although, I did not pursue the monastic life style, our friendship continued over the years, through letters and subsequently through email. Llewellyn and I had corresponded just three days prior to his death. I feel so blessed over that last communication.

While taking road trips from Denver to Bismarck to visit family, I would also occasionally stop off to visit Llewellyn. My last visit was in the Fall of 2019, when I got off the interstate to say hi. Llewellyn took me around the grounds, pointing out his latest landscaping efforts, and what a challenge that is with North Dakota winters and summers! However, he always had a showcase to behold. From there, we would continue our walk through the studio which is filled with so many of his incredible art projects and pieces. I have always been amazed at how he would continue to cultivate his skills and talents.

During Llewellyn's trips to Bismarck for medical appointments, he would occasionally stop to visit my mother whom he met during the late 1970's. In fact, he, and Br. Louie, visited my mother at the Baptist Care Center just last fall where my mother was undergoing physical rehabilitation. She treasured his visits. During the later years of the 1970's, I also met your mother who was such a joy to know. Throughout our communications over the years, Llewellyn often filled me in with details of your family, just as I did in sharing my families' details with him. Therefore, I almost feel as though I know some of you.

My sympathies go out to you all. I know we will miss Llewellyn greatly. May God bless Br. Llewellyn and all his many friends and family. 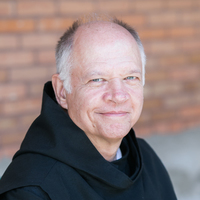