To share your memory on the wall of Patricia \"Patsy\" Decker, sign in using one of the following options:

Patsy passed away February 27, 2020 at Essentia Hospital in Duluth, MN.

Patricia Decker was born August 22, 1922 to Anton and Annie (Barta) Hibl. As a young girl, she attended Spring Creek School (a one room school northeast of Belfield) from 1928-1936. Patsy loved sharing the story of walking or riding a horse and buggy to school. In the winter, it was a horse drawn sleigh. She met the love of her life, Adam Decker at a barn dance in 1938 and they courted for about a year. At the age of sixteen, Patsy married Adam in June of 1939. They were blessed and started their family of six children in 1941. Adam was drafted into the Army during World War II and was stationed at Camp Lee, VA and later Seattle, WA. In 1945, they purchased a little house in Belfield on Main Street. Patsy’s dream home, which was filled with clever ideas she had gathered for years, was built in 1965 on the family farm. After fifty years in their home of many memories, Patsy moved to Fargo for a year before moving to Hermantown, MN.

Patsy was a devout Roman Catholic and attended mass daily. She was a member of Catholic Daughters and the Christian Mothers Guild. She faithfully kept her Saturday Holy Hour of Perpetual Adoration and took care of the replacement votive candles on the side altar. Patsy had a strong devotion to the Rosary which was a constant in her life and included a large rosary collection. St. Jude was her favorite Saint and she believed he had helped her through difficult times. Patsy was a member of St. Bernard’s parish and Belfield Chamber of Commerce.

Patsy worked outside the home at Pete’s Café, South Side Mercantile and the Medora Gift Shop. She also enjoyed serving as the local Avon lady for many years. When Belfield lost their inter-city bus service, Patsy and other lady friends successfully worked to get service restored. This effort consisted of contacts with the Governor, North Dakota Senators and anyone else of influence who would listen to them. She also took on the job of poppy sales for Veterans Day and increased sales tenfold by enlisting the help of the Boy Scouts and strategically placing poppy donation containers at various business locations. Patsy participated in the placement of planter pots in downtown Main Street and dutifully watered her assigned planters. She was a member of the TOPS and enjoyed the many friends she met while attending weekly meetings and state conventions.

While living in Belfield, Patsy was an active member of the American Legion Auxiliary, where she cajoled organizations and others to decorate and enter floats in various parades. With her fun spirit, she would decorate her own SUV and participate. Patsy was an avid card player, coming at a fast pace when she heard someone say “Canasta, Racehorse Pinochle or GIN Rummy”! Medora and the T.R. Medora Foundation were also a favorite of hers. Everywhere she went she would talk about the wonderful musical and the activities in Medora. She was very proud to have been an early supporter and fan, remaining a member until her death.

In lieu of flowers, the family suggest memorials be made to Belfield American Legion or St. Bernard’s Catholic Daughters.
Read Less

To send flowers to the family or plant a tree in memory of Patricia "Patsy" Decker (Hibl), please visit our Heartfelt Sympathies Store.

Receive notifications about information and event scheduling for Patricia "Patsy"

We encourage you to share your most beloved memories of Patricia "Patsy" here, so that the family and other loved ones can always see it. You can upload cherished photographs, or share your favorite stories, and can even comment on those shared by others.

Trish, Vickie, Paulette and Carol, Stormy and Stacia, and other have sent flowers to the family of Patricia "Patsy" Decker (Hibl).
Show you care by sending flowers

Posted Mar 17, 2020 at 07:06pm
Aunt Patsy...you always made me smile every time I was around you....you were always so joyful...…..I do remember the few times I was fortunate to have coffee with you......I remember the sleep overs at your house by the highway across from the gas station.... lots of memorys …..everything I remember about you …. definitely puts a smile on my face...… your families loss is heartfelt and we have many prayers for you and for ALL of your family.....may you rest and peace and god bless your family....
Comment Share
Share via:
F

Posted Mar 14, 2020 at 03:41pm
Here are just a few of the cherished memories of Patsy-both of us in church after weekday mass she invited me for coffee at Trapper’s. This was all new to me yet so happy she asked. I did go.Now forever long time best of friends -church and Trappers together. So much miss you now after you left me for heaven. I’ll see you there as soon as God opens heavenly doors and we will be so happy together forever. Much love, Florence
Comment Share
Share via:
TC

Posted Mar 12, 2020 at 08:58pm
At a time such as this, words cannot express feelings. Please know that even though we can not be with you today, we are sending you our love.

Posted Mar 12, 2020 at 03:18pm
Patty, Pat and Family, we were so sorry to hear of your loss and our thoughts are with you all. May your memories bring you peace and comfort.

Flowers were purchased for the family of Patricia "Patsy" Decker. Send Flowers 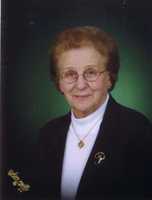