To share your memory on the wall of Wilfred Kovash, sign in using one of the following options:

Print
Funeral Mass for Wilfred P. Kovash, 84, of Dickinson will be 10:00 a.m., Saturday, February 1, 2020, at Queen of Peace Catholic Church in Dickinson with Father Russ Kovash celebrating.  Entombment will take place at the Dickinson Mausoleum.

Funeral Mass for Wilfred P. Kovash, 84, of Dickinson will be 10:00 a.m., Saturday, February 1, 2020, at Queen of Peace Catholic Church in Dickinson with Father Russ Kovash celebrating.  Entombment will take place at the Dickinson Mausoleum.


Wilfred passed away on Wednesday, January 29, 2020 at Sanford Health in Bismarck.


Wilfred P. Kovash was born May 24, 1935 in Dickinson, the son of Peter Kovash and Mary (Sadowsky) Kovash.  He grew up on the family farm near Manning attending country school and graduating from Model High School in Dickinson.


Wilfred was united in marriage to Georgia Jablonsky on June 27, 1955 at Sts. Peter and Paul Catholic Church in New Hradec.  To this union, twins-Rick and Rock, Lori, twins-Les and Len, and Tana were born.  The couple made their home on a farm 20 miles north of Dickinson.  They later moved to Dickinson in 1961.  Wilfred worked at Hauck Millwork.  He then started his own cabinet shop that he worked in for over 51 years and was fortunate enough to have his son join him.


Wilfred loved bowling, playing horseshoes, fishing and camping.  He enjoyed playing slot machines.  Wilfred and Georgia both sang in the Czech Singing Group and Wilfred was very proud of the old time band, Kovash Trio, he played in.  He was an avid Trinity, Vikings, and Twins fan and never once did they lose when the refs weren’t to blame.


Wilfred loved his children, grandchildren, and great grandchildren.  He cherished time watching their sporting and school activities.  He was always a farmer at heart and enjoyed “Going to look at the crops!”


In lieu of flowers the family suggests memorials to Trinity Catholic Schools.

To plant a memorial tree in honor of Wilfred Kovash, please visit our Heartfelt Sympathies Store.

Receive notifications about information and event scheduling for Wilfred

There are no events scheduled. You can still show your support by sending flowers directly to the family, or planting a memorial tree in memory of Wilfred Kovash.
Plant a Tree

We encourage you to share your most beloved memories of Wilfred here, so that the family and other loved ones can always see it. You can upload cherished photographs, or share your favorite stories, and can even comment on those shared by others.

Posted at
Rick,Rock,Lori,Len,Leslie,Tanya &families, We are so sorry to hear about the loss of Uncle Bill. He was a very dear uncle to us as he was a very fun loving man who made everyone smile/laugh. Our thoughts and prayers are with you all during this very difficult time. We’re sorry we are not able to share this day with you . We’ll keep you close to our heart.
Comment Share
Share via:
LB

Posted at
Willie will be missed! He had such a good sense of humor. Keeping all of you in my prayers. LuAnn Berger
Comment Share
Share via:
R

Posted at
Farewell to dear Willie and so happy you and Georgia can forever dance to the best of the old time music, you have joined the big angel band. My sympathy and prayers to his dear family.
Comment Share
Share via:
TK

Posted at
To the family, I was saddened to learn of the passing of your Father. I remember him to be actively engaged in all of his children's activities and Queen of Peace Parish. Our thoughts and prayers are with you at this time. Thomas and Melisa Kennedy
Comment Share
Share via:
FF

Posted at
Condolences to the family, Willy was one of kind, always a smile, a true gentleman. Will miss his jokes, stories and laughter. RIP my friend
Comment Share
Share via: 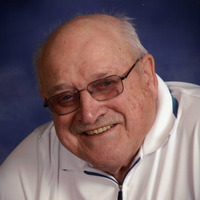