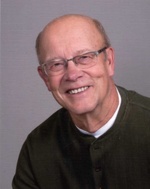 Bill passed away peacefully on June 3, 2020, at Sanford Hospital in Bismarck, North Dakota, after a brief struggle with cancer and complications of Alzheimer’s.

Bill was born on June 15, 1949, in Mandan to parents William and Lorraine (Barchenger) Keuther. He grew up in New Salem, North Dakota, with his three older sisters, who loved their little brother. He graduated from New Salem High School in 1969 and attended Bismarck Junior College before joining the army in 1971. Bill married the love of his life, Victoria “Vickie” Doll on December 27, 1971, at St. Pius V Catholic Church in New Salem. He was then stationed in Okinawa, Japan, where he welcomed his first daughter Rebecca “Becky” in 1973. Bill and Vickie returned to New Salem in 1973 and had their second daughter Brooke in 1978.

Bill was very active in his community and church. He was a member of the American Legion and marched in the Color Guard. He served on the New Salem Planning and Zoning Board and Jaycees. He also served on the Peace Church Board for several years. When Bill wasn’t working at the New Salem Farmer’s Union Elevator, he could be found on the golf course, bowling, or enjoying the outdoors. He and Vickie enjoyed traveling throughout the country where they took in many sights and experiences.

Bill was adored by his children and grandchildren and had many friends. He had a soft spot for animals and loved sweets. He was known to be exceptionally kind, loving, generous, and selfless. Bill had a keen sense of humor, loved to tell jokes, and enjoyed playing pranks. He was known for his smile and laugh and will be deeply missed.

In lieu of flowers, family suggests donations be made to the Alzheimer’s Association.